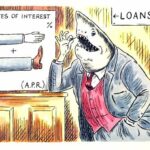 The England Illegal Money Lending Team are working with partner agencies across England to warn people of the dangers of borrowing from loan sharks in the run up to Christmas.

The National Team, who investigate and prosecute illegal money lending offences, are advising residents to steer clear of loan sharks who may be offering quick cash loans to afford luxury items.

What is a Loan Shark?

A loan shark is someone who lends money without the correct permission from the Financial Conduct Authority. Loan sharks may initially appear friendly and act as though they’re offering a community service. This behaviour soon changes once monies are owed. Loan sharks will commonly resort to bullying tactics such as violence and intimidation to enforce repayment, causing borrowers endless misery.

Loan sharks rarely provide paperwork on the loans they give out and will often refuse to tell the borrower how much they owe, the period they have to pay it back by and how much interest they are being charged. In July, a Manchester loan shark was prosecuted for his illegal money lending business whereby he charged his victims a staggering 4.5 million per cent APR.

How can I help?

If you’re like the 26,000 loan shark victims that IMLT have helped, get in touch by calling the team’s 24 hour hotline on 0300 555 2222 or email reportaloanshark@stoploansharks.gov.uk

Nationally, the England Illegal Money Lending Team have secured 368 prosecutions, leading to over 318 years’ worth of custodial sentences. The team have also written off over £71 Million of illegal debt.

“We are working with partner organisations and local communities to promote the Stop Loan Sharks message. Our aim is to let those borrowing from loan sharks, especially in the run up to Christmas, know that help is available.

“If you or someone you know has been a victim of a loan shark, we urge you to call our 24-hour hotline on 0300 555 2222 where your call will be handled confidentially by one of our trained Officers.”

To report a loan shark:

Private message us on www.facebook.com/stoploansharksproject